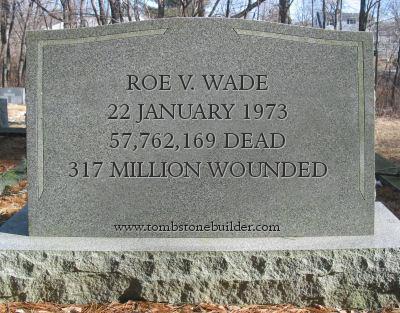 On 22 January 1973 the Supreme Court argued that the above paragraph explicitly forbid the state from protecting the lives of unborn children. Voluntary abortion became legal in America. Children younger than 9 months lost "equal protection under the law" and could be deprived of life without due process. Since that time approximately 57 million children have been killed by legal abortion in the United States. That's 114 million mothers and fathers affected by abortion, and 228 million grandparents who have lost a child to abortion in 42 years. To put that in perspective, the US population was 317 million in 2014. In her recent post, Healing in Public, Abby Johnson describes the human cost those numbers represent.

Today is a day to pray for the legal protection of all human persons, born or unborn. It is also a day to fast in reparation for the evil of abortion, and pray for the healing for those who have been wounded by abortion. For 42 years we have fasted and prayed and abortion is still legal. Sometimes you get the feeling that maybe we aren't working or praying hard enough. But that isn't true, because abortion is part of the culture of death that was unleashed in the Garden of Evil. Ever since our first parents sinned, evil has always been too much for us to fix on our own. Only God can repair the wounds caused by our sin and selfishness. Our job is not to "stop abortion". Instead, we are called to cooperate with God, to work along with His plan for bringing light into the darkness. It is like listening as God sings His love song to us, and joining in the music with the part we are asked to sing. Because the truth is, a good song only dies when people stop singing it. Keep singing the truth!

to get emailed when
Fr. Joel posts new articles.

Email me when a new:

You can also subscribe to the Pilgrim Priest Podcast on your smartphone or podcast app.