The Woman Who Conquered Mexico

December 9, 1531, Bishop Juan de Zumarraga received an unusual visitor at his Bishop's palace in Mexico City. The Spanish conquistadores firmly held the reins of power, having conquered the Aztecs and ended the pagan worship and human sacrifice. They were not kind to the newly conquered Aztecs. The Bishop's visitor was one of the few converts to embrace the new religion. His name was Cuauhtlatoatzin ("talking eagle"), but he had taken the name Juan Diego at his baptism. Speaking through an interpreter, the native claimed to have seen a beautiful woman who was the ever virgin Holy Mary, Mother of the True God. She wanted the Bishop to build a shrine on the particular hill outside of town. The Bishop was skeptical and said he would think it over. He sent the native away.

The next day, Juan Diego was back and insisting even more on his message. Bishop told him it was not enough to hear the message; he needed to see a sign. A day or two went by and then the native returned again. He was carrying something folded up in his tilma (a blanket woven of cactus fiber and tied at the shoulder like a cape). He announced that he had seen the lady just as before, and this time she had bid him cut some roses growing on the hill. He opened his tilma and the roses spilled out on the floor. But the sign was more than flowers. There on the fabric appeared an image of the woman herself. The Bishop knelt down in worship, and then went with Juan Diego to find the spot to build the church. Juan Diego took up residence there and for the rest of his life told and re-told the miraculous story. Within a few short years, over 5 million natives were baptized. 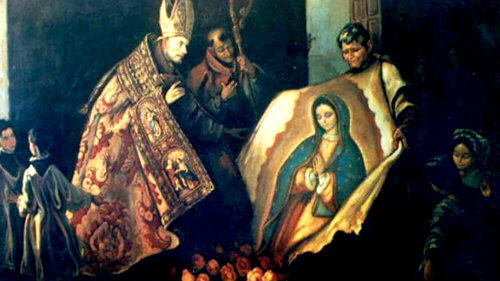 The most miraculous thing about this image is that it still exists almost 500 years later. The image has not faded and still retains remarkable color.

The texture of the cloth is rough and uneven, hardly a good surface for a masterpiece. One investigator reported that the image appeared flat and dull at close range, but from 6 or 7 feet away it suddenly comes together. He believed the uneven texture of the fabric had actually been used to give depth to the image, much like a hologram.

The image recalls Revelation 12:1, "a woman clothed with the sun, with the moon under her feet." It also speaks volumes to the native peoples. The woman is eclipsing the sun and standing on the moon and wearing the stars -- clearly more powerful than the "gods" they worshiped. Yet she is praying to some higher power. The black sash indicates that she is pregnant. It is the Advent mother carrying her son to a distant country.

The most beautiful thing about the apparition is the incredible love and tenderness she shows to Juan Diego. She says, "I wish that a temple be erected here quickly, so I may therein exhibit and give all my love, compassion, help, and protection, because I am your merciful mother, to you, and to all the inhabitants on this land and all the rest who love me, invoke and confide in me; listen there to their lamentations, and remedy all their miseries, afflictions and sorrows."

Is it any wonder that the Mexican people have particular love for this Lady? Even the native people of the "New World" are her children, and she is their merciful and compassionate mother. This humble woman is the most successful evangelist of all time. Our Lady of Guadalupe is proof that the Good News is always a message of love: "You are loved; come meet the One who loves you."

Her feast day is celebrated on December 12, and with particular joy by her New World children.

Read an English translation of the Nican Mopohua, the classic account of the apparition written in the native Nahuatl language.

Details that will blow your mind.

to get emailed when
Fr. Joel posts new articles.

Email me when a new:

You can also subscribe to the Pilgrim Priest Podcast on your smartphone or podcast app.